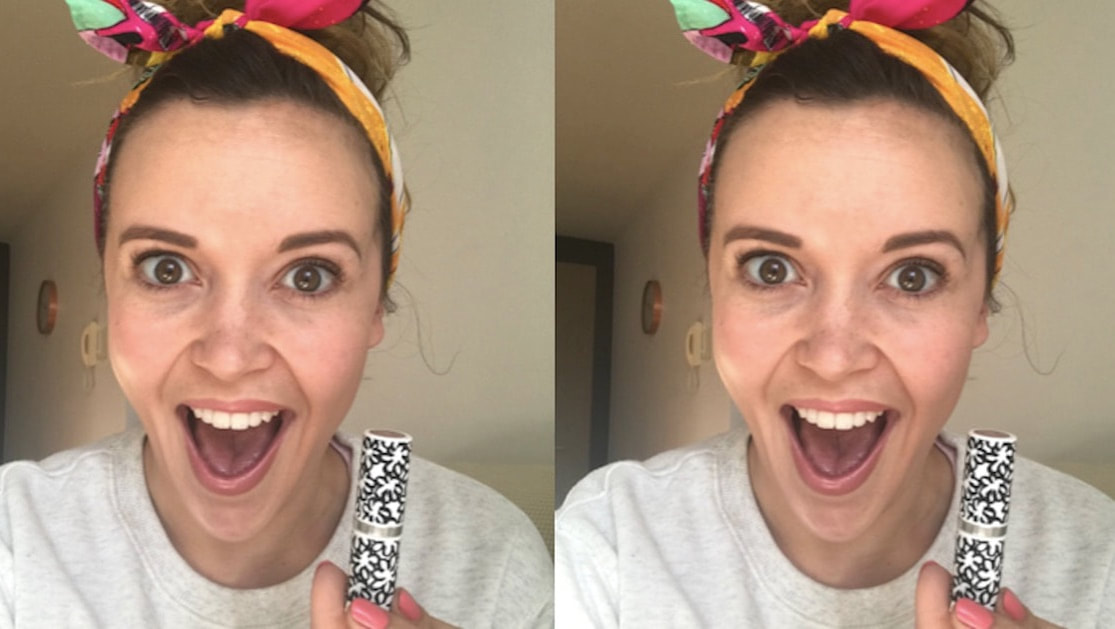 I apologise in advance, friends. Sh*t did not go to plan.

A few months ago, my dirty sticky-fingered neighbour stole a box of Clinique makeup from right under my nose, and we caught her on CCTV footage (for the full story, read THIS BLOG first). I was livid. I was devastated. I was crying on the couch listening to Adele and stabbing a voodoo doll with a mascara wand. Alright, life went on like normal, but I was sans a very fabulous lipstick that I had been much looking forward to, the Clinique Nude Pop. Sigh.

Firstly, I put the story on the internet, because I'm a millennial and that's what we do. OKAY? SHUT UP, JUDGEY HIGH-HORSES. The internet enjoyed the story and was thirsty for revenge, so much so that I had several media outlets contact me, which was concerning because a) is this really news? and b) it was not the first time I had been in the media for dobbing my neighbours into the internet. Awks.

During that media frenzy that lasted a mere six-ish hours (which is probs not a frenzy, unless you're trying desperately to watch Grey's Anatomy and your phone keeps buzzing), I was contacted by a particular current events program, who even offered me a substantial amount of moolah if I would give them the CCTV footage, and confront my lipstick-thieving neighbour on camera. I won't name the program, but let's say it rhymes with A Shmurrent Shmaffair. I refused, because AT NO POINT did I release the footage, even though some of the online articles made it look like I did by including unrelated CCTV footage, those cheeky bastards. (Side note: everyone who contacted me was delightful, and thanks for making me feel interesting and famous.) 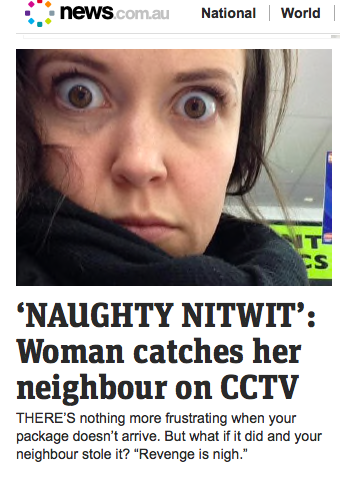 Note to self: don't use weird Harry Potter-ish terms that could become a headline under your own face.
​Anyhoo.

Two months flew past in which I rewatched six old seasons of Grey's Anatomy, yet could not find the time to clean out the freezer. You know what I mean?

In that time, we (as in, me + my lawyer fiancee, who was perhaps even more emotionally invested in the scenario than I was because he likes to think of himself as a part-time detective. Cyoooot) slipped a very friendly letter into the offending neighbours' letterbox.

Yes, that's right. We didn't slip a bomb under her door. We didn't plaster her face all over the suburb. We wrote a very friendly letter, because I'm a knee-trembling wimp, and because she was clearly an unhinged criminal.

Blah blah blah 'it seems you have picked up the parcel in question' blah blah 'able to identify you as we can see which letterbox you opened before picking up my parcel' blah blah 'might be a misunderstanding, happy to discuss it if you'd like to' etc.

We asked her to slip $360 in our letterbox in unmarked bills (just kidding, I don't really know what they are.  Just regular cash money would do fine) because we'd paid $300 for the CCTV footage, and $60 for the parcel. Look, it was a long shot, but we thought she'd be so embarrassed about being caught, she'd definitely pay up. 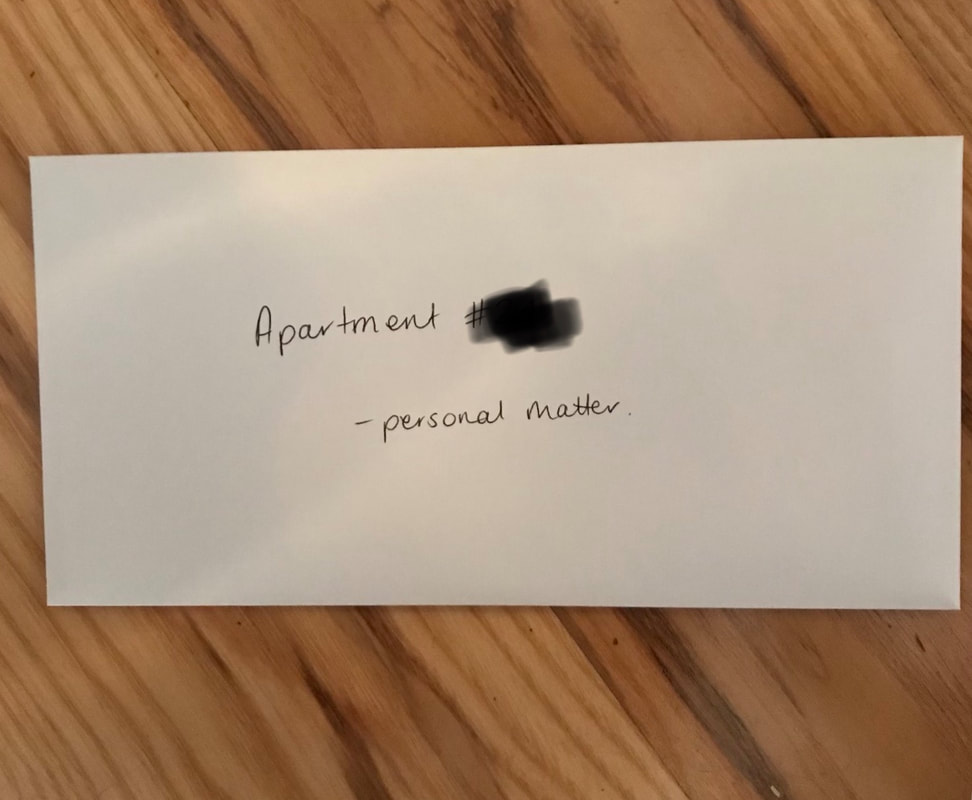 Vague and threatening and polite, all at the same time. (See the lengths I'm going to to protect her anonymity?)
BUT... SHE DIDN'T FUCKING DO IT.

We had included a phone number in the note. NOT mine, because I would've been awkward and overly-apologetic and probably would've let her into the house to steal anything she wanted. Lawyer Fiancee's phone number was a much better option. So one night, about five days after we dropped the letter in her letterbox, she rang him.

Her defence was flawless. She didn't 'take' the parcel. She moved it from the lobby to in front of our apartment door, where there are conveniently no CCTV cameras.

It was so frustrating. I mean, I totally believe her because a) the Owners Corp told us that she had made prior complaints about mail theft, so it seemed weird that she would then become a thief (unless it pushed her over the edge to a life of crime) and b) I am also a nice person who would do such a considerate favour for my neighbours. Unlike my fiancee, who claims NO ONE would ever be that nice, and that b*tch is definitely a dirty thief (I swear he's a good person, deep down).

So what could we do? Absolutely shit all. There is no more CCTV footage to purchase. All trails have gone cold. If she did leave it in front of our door, it must have been picked up by either our direct apartment-door neighbours or a meandering Uber Eats delivery person. (Lawyer Fiancee will argue how unlikely that is, given that we live at the end of a hidden corridor... but then again, we do eat a buttload of Uber Eats.)

Now it's really awkward whenever we see the non-Thief around the building. For us, not her. She doesn't actually know what we look like, she's only seen my handwriting and heard his voice. But we know her face from the CCTV footage, so now we both hide from her like the chicken shit cowards we are.

I do apologise because I know how anti-climactic the whole situation is. Believe me, I do. I had no lipstick, no thief, no bunch of free samples included with purchase, and no $360 (not to mention the extra few thousand from A Shmurrent Shmaffair - but THANK FUCK I HADN'T CONFRONTED HER ON CAMERA!). I had no gratification.

I sent my whole ungratifying story to the good ol' customer service department at Clinique, and look what they sent me. My beautiful, scrumptious, inimitable precious: Clinique Nude Pop Lipstick. 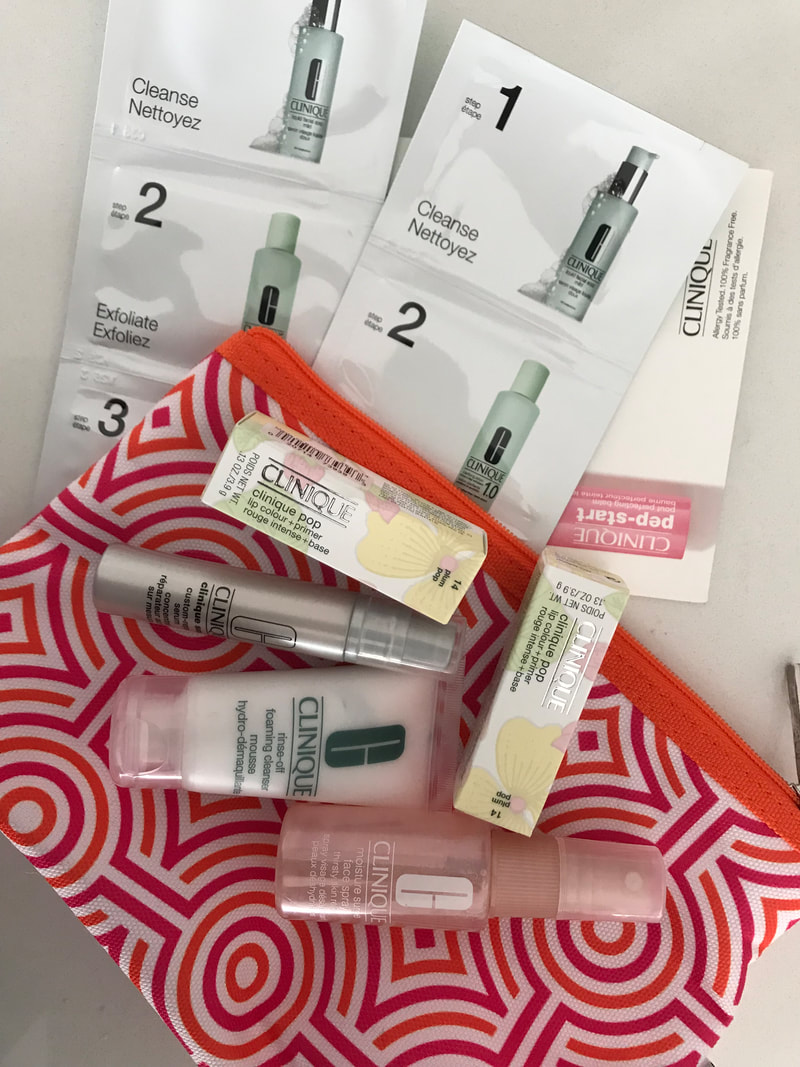 And a whole bitch-tonne of freebies. YAS.
This story does have a happy ending after all. My lips have never felt so good. Thanks, Clinique. I love the shit out of you.

And to my dear ol' neighbour, who may have stolen the original lippy, or who might've kindly placed it in front of my door - thanks for the rollercoaster journey.

May we never make eye contact in the lobby again. 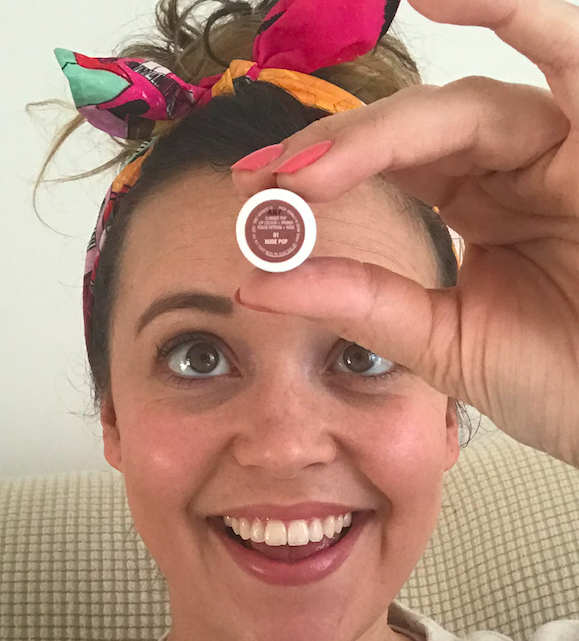 There she is. Clinique Nude Pop, from the Marimekko range. Worth it.